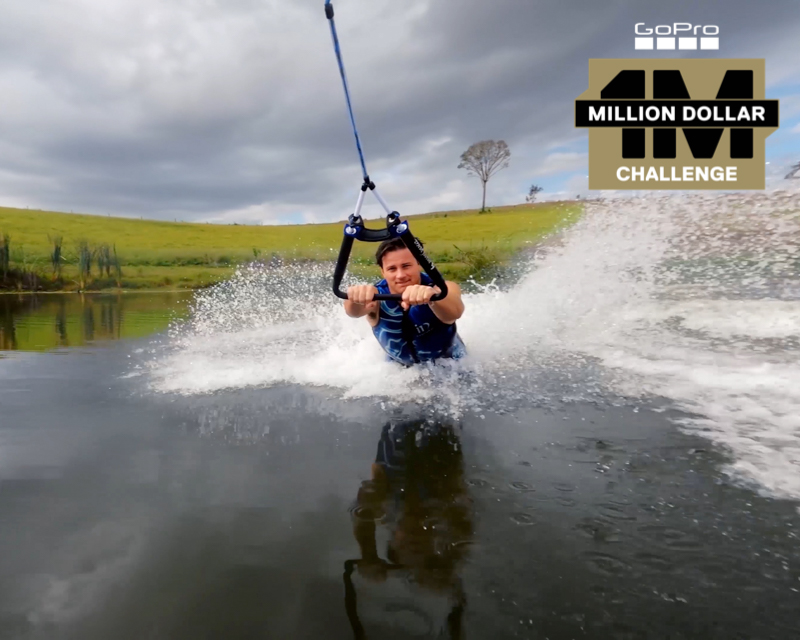 Waterskiing is cool. But you know what’s cooler? Barefoot waterskiing!

GoPro Family Member Aaron “Azza” Sullivan nailed the barefoot waterski to land his clip in the 2020 Million Dollar Challenge. Not only did Azza win big, but he found out moments after his second son was born. Check out his story below.

GoPro: Tell us more about how you got your Million Dollar shot. You mentioned that you met the skier Keenan at a SeaWorld stunt show? Did you guys meet up with the goal to film for MDC?

Azza: Yes, so after meeting Keenan at SeaWorld, we kept in contacted. I had watched him on TikTok doing some incredible things and going viral. We both had spoken about getting together and filming some GoPro content. After GoPro announced it was hosting the third MDC Keenan was the first person I contacted.  We knew [barefoot waterskiing] was something we had never seen in a GoPro video before. We were really lucky that morning, as big black clouds rolled through, there was a small window of blue skies which we were able to capture that run.

Did you guys think you got the Million Dollar shot before the video was announced?

We had no idea, I had only got home from hospital that day with our new born son, Hudson. My wife had just got him back to sleep—it was midnight in Australia when the video went live. I had to celebrate in complete silence and jumped around the living room like a mad man. I nearly went through the ceiling fan.

What has inspired you to keep capturing GoPro content all these years?

For me, I just love the GoPro community. I’ve been lucky enough to meet and hang out with so many likeminded people that I now call my friends. My wife got me a HERO3 Silver for Christmas in 2012 to film my mountain biking, and I haven’t put it down since. GoPro also always offers challenges throughout the year, which keeps it interesting and fun. I like to set myself goals each year that I wanna achieve with GoPro.

If you had to pick one, what’s your favorite GoPro moment that you’ve captured?

For me, it would be when GoPro shared the photo of my son and me riding around the city in Brisbane (above).

A lot of my content these days is with me and my son, Ashton. I really enjoy getting out and being active with my son and try do as many fun activities as we can together. GoPro was actually one of his first words. And he still points out the GoPro logo every time we see it at the shops.

Do you have any other exciting plans for 2021? Other than enjoying time your newborn!

2021 will be a lot of family time and fun at home with our new family member, Hudson. But my GoPro is always with me to capture those family moments. I have recently teamed up with the website adrenaline.com here in Australia. They want to send Ashton and me on some fun activities around Queensland. So we are really looking forward to that and getting those unique GoPro shots.

I’d love to thank GoPro for this amazing opportunity. GoPro has changed my life and connected with so many people from around the world. And, to our group of friends that keep each other motivated—I thank you.