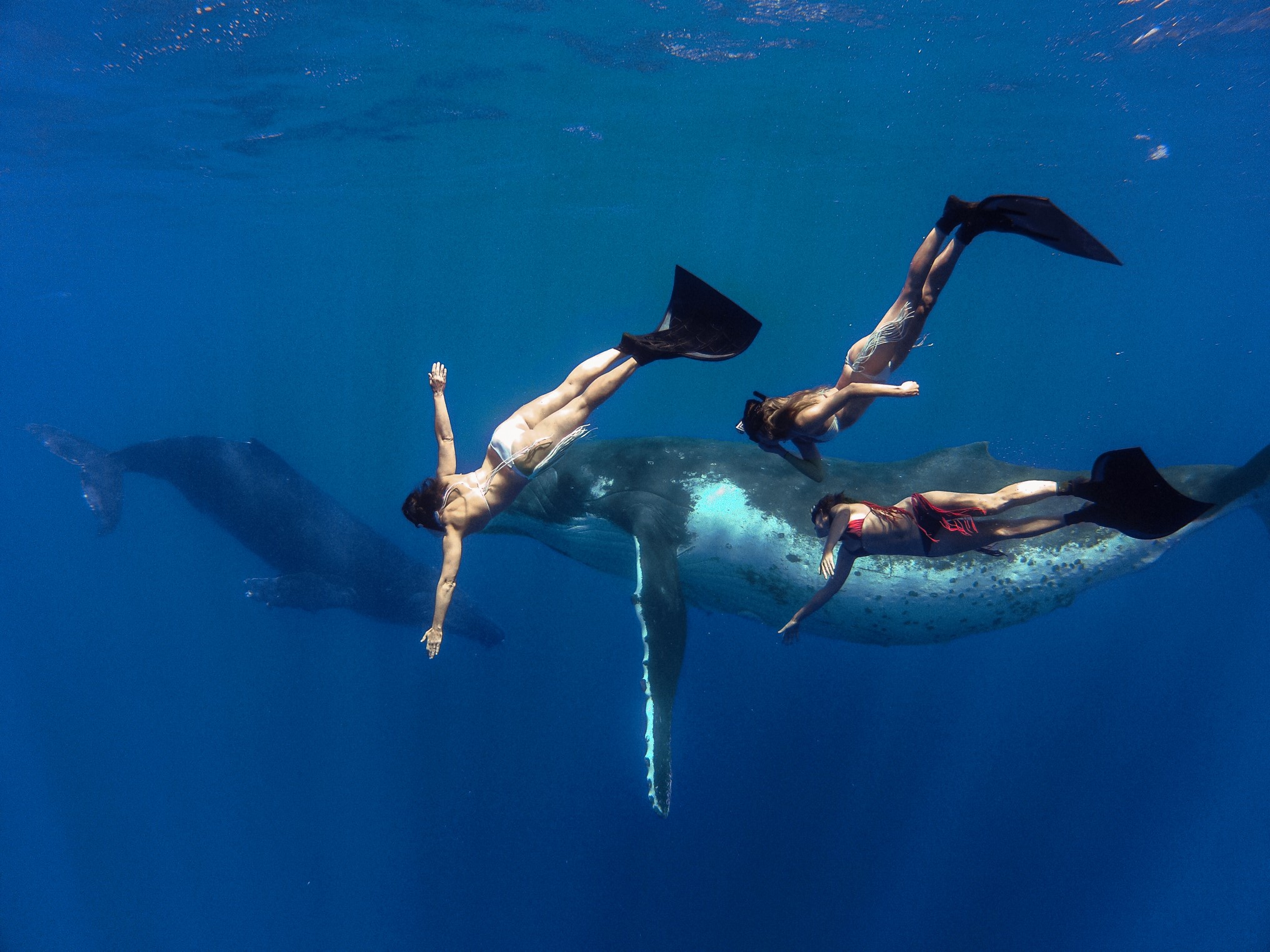 Have you watched it lately? It’s incredible. The visuals alone are enough to raise the hairs on your arms; add to that the effervescent voice-over of the late, great contemporary philosopher Alan Watts, and it’s a near spiritual experience.

“Let’s have a dream that isn’t under control; where something is going to happen to me that I don’t know what it is going to be…Then you would get more and more adventurous, and you would make further gambles as to what you would dream. And finally, you would dream where you are now. You would dream the dream of living the life that you are actually living today.”

How cool is that? The idea that reality is far more fanciful than a dream–sounds pretty cool to us, and the epic footage only seems to reinforce the thought. So how did it all come to be? In early 2013, while brainstorming for the HERO3 camera launch, GoPro Creative Director Bradford Schmidt found himself envisioning a seemingly unrealistic goal: human interaction in the wild with humpback whales.

“The HD HERO3 was our first camera to incorporate a flat lens housing. I knew the underwater capability was going to be a massive selling point, so I had to pitch ideas to Nick [Woodman, founder and CEO] – ideas of something no one had every really seen or captured on a GoPro before,” said Schmidt. “One of the images that inspired me was a monofin on a freedriver on the poster for The Cove. I immediately asked myself how I could make it more spectacular. What if it were whales instead of dolphins? I pitched the idea to Nick, and he was immediately sold. How difficult could it be, right?” 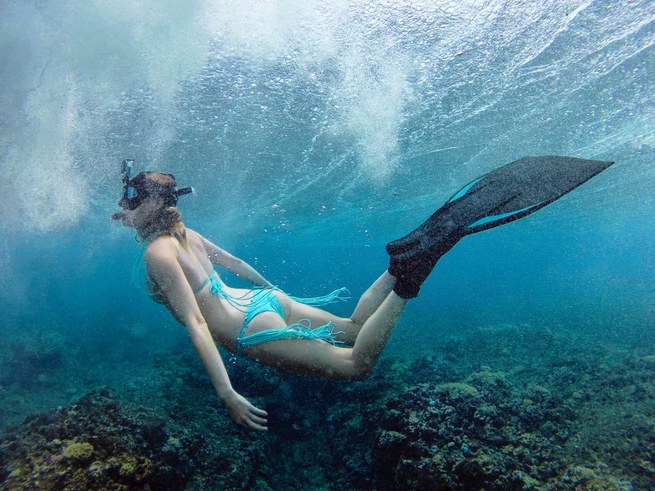 Schmidt hit the research trail, and soon realized he couldn't scuba dive with whales, as they don't really like the bubbles generated from scuba equipment. As well, you have to ascend and descend quickly in order to follow and film them, which is difficult to say the least. After briefly returning to the drawing board, he concluded that freediving would have to suffice. Thus, he took a freediving class to train. Coincidently, he soon stumbled upon the Performance Freediving website, which is run by the couple, Kirk and Mandy-Rae Krack, from The Cove.

“Production for the HERO3 happened really fast. We were on the South Island of New Zealand during the middle of the shoot, and I was at a lake drinking a morning tea and realized that I was aiming too low on this one. I thought we should really have three powerful siren females instead of just one. I liked to call them sirens instead of mermaids because the name seemed more powerful and we wanted them to sing and dance with the whales,” Schmidt recalled. “I contacted Kirk and he sent me a list of his top three freediving instructors, and in the middle of September right when we wrapped up Tahiti and the North Island of New Zealand, we flew out to Tonga–the Vavau Islands.” 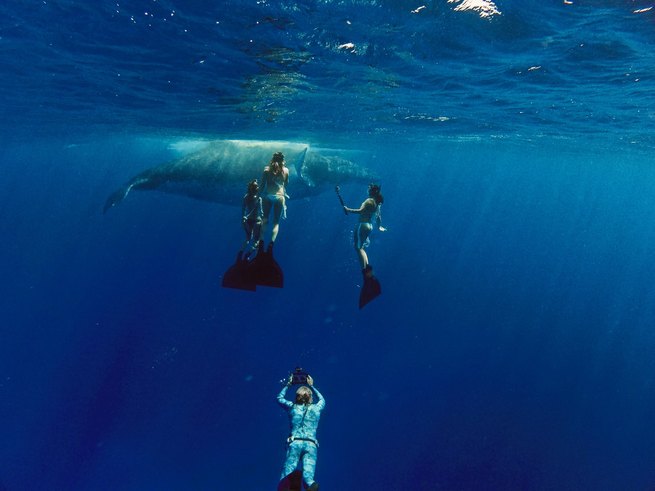 There are only two places where you can legally dive with Humpback Whales, and Tonga is one of them. It’s also home to some of the clearest water on earth with visibility over 100 to 150 feet. So, with a clear vision in mind and destination in focus, Schmidt called upon the three freedivers recommended to him. In the blink of an eye, Brad’s future “sirens” Mandy-Rae, Erin McGee, and Ashleigh Baird were on a plane to Tonga, admittedly unsure as to what they were actually embarking.
“We know it was really crazy when we were out there. It was an awesome trip and Ashleigh and I had a really amazing time doing it. I’ve never done anything like that,” recalled Erin.

Schmidt had only a short window of time to capture footage, so he knew he might only have one chance at getting his climactic moment. Consistently reminded by the outfitter and ocean guides that shoots like this usually slate 20 to 30 days, Schmidt knew he had only five. For the first few days, the small team followed the giant humpback whales in hopes they would become at least somewhat acclimated to their presence. On the second-to-last day, however, they struck pay dirt: three mermaids in harmony with a large female humpback whale. 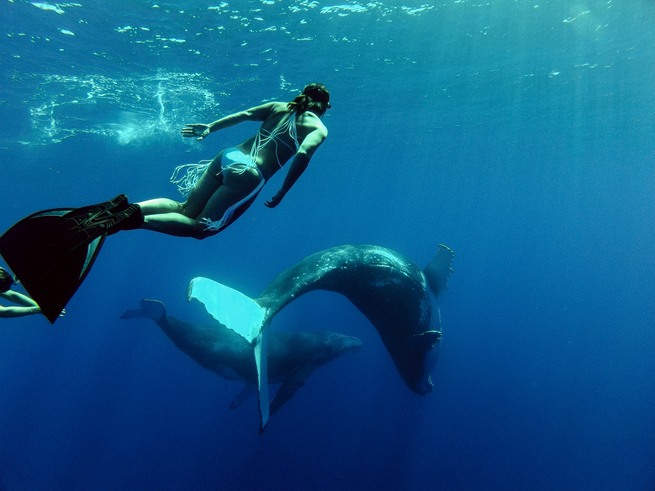 With a climactic moment of human-whale interaction in the can, Schmidt and the small team continued to capture amazing content in the highly visible water, including under-water “surfing” and free-dive exploring. The clarity of the water and the smooth, rhythmic motion of the freedivers proved to be supremely calming footage, and as it began to be edited together in post-production, Schmidt thought it a perfect opportunity to incorporate a voice-over. He didn’t have to search long. Almost immediately he thought of Alan Watts. After plenty of sifting for the perfect sound bites, a soundtrack unlike any other previous GoPro production was solidified, and a cerebral GoPro video was born.

Whale Fantasia can’t just be watched once. It’s a favorite, and one to revisit time and again.