The following words and GoPro content are by Jonny Bierman, a sustainable travel advocate, storyteller and GoPro creator. In his own words: “I use my GoPro’s to uniquely explain how we can leave a place better than how we found it while exploring the world around us, and I do this by connecting travel with community, culture, and conservation.”

In a remote corner of our beautiful planet, the most important sustainable travel story of our time is unfolding in the most biodiverse place on earth, and it deserves your attention. Raja Ampat, Indonesia, is located in the coral triangle at the intersection of the nutrient-rich Pacific and Indian oceans. With aquatic biodiversity comes abundance in marine life and, with that, also comes the eyes for extraction. This, however, is not a grim story. This is the story of how sustainable tourism is saving the world’s richest reefs and how you can be a part of that story—both in Raja Ampat and anywhere your GoPro takes you.

Instagram and the Internet have become very familiar with Raja Ampat in recent years, and for very good reason. The remote limestone islands of West Papua, Indonesia, are painted with tropical colors comparable to none. Each dive and snorkel excursion transports you to scenes straight out of a “Planet Earth” or “Blue Planet” documentary, while each organism and species play out a specific role to symbolically coexists in the rich environment. If this hasn’t won you over yet, just wait until you hear about the resort at the center of it all.

But before we get started, it’s important to note why HERO7 Black was my camera of choice for this trip. First of all, it allowed me to immerse myself in the beauty around me without being invasive. I could be discreet while capturing content, without worrying about quality being sacrificed. And second, I never thought twice about taking the GoPro everywhere with me—on land, below water, on research missions with marine biologists, or while taking in the scenery—it went everywhere.

My favorite and most used accessories for this trip were the Dive Housing, Handler for a good dip in the water, Bite Mount + Floaty for those perfect POV angles, and Jaws to effortlessly capture video, TimeWarp Video and Time Lapses.

Now let’s take a look at the magic of Misool! 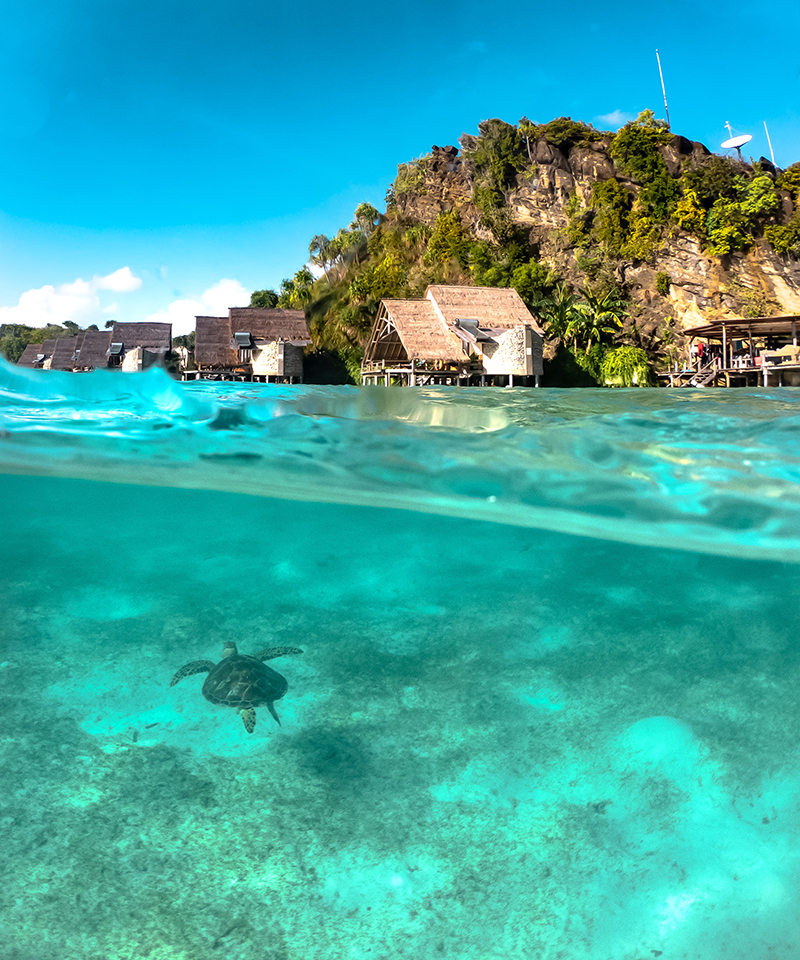 Misool Resort is a well-established sustainable resort in Raja Ampat that delivers on the promise of showing guests the best diving in some of the most remote and beautiful islands in the world. Equally, above the surface excursions are endless while exploring the surrounding islands and reefs, most of which are uninhabited. Hard to get to? Yes, but what supernatural place out there isn't? Misool isn’t for every traveler; it’s for the right traveler. They will never say they are a luxury resort, although the experience is pretty luxury in my mind.

A trip to Misool Resort starts with making the journey to Sorong, Indonesia, which is a six-hour flight from Jakarta (it’s actually closer to Darwin, Australia, than Jakarta). From here, Misool’s new and premium transfer yacht makes the three-hour journey to the private island resort nestled amongst the world’s richest reefs.

The story of Misool Resort doesn’t start with the resort itself, it starts with the discovery of a problem and the need to address it. Around 2005 the owners Marit and Andrew Miners were diving in the area and took a surface interval on the island where Misool Resort is now located. Upon their arrival, they realized they weren’t alone.

There was a shark finning camp stationed there, and countless fins were drying in the sun, illegally and inhumanly harvested. Sharks are an apex predator and a crucial species to the health of marine ecosystems everywhere. In addition to illegal shark finning, bomb fishing (the act of blowing up a reef so the fish float to the top) and other illegal practices were decimating the most biodiverse and beautiful marine ecosystem on earth, but in the early 2000s, that began to change.

Recognizing this problem among others that needed to be addressed, the newlywed couple (fluent in the local language thanks to years working on local liveaboard boats) approached the chief in the local indigenous community and presented a solution to a problem largely out of their control. They would start an eco-resort which would fund a conservation effort in the form of 24-hour patrol in what is now the marine reserve and the Misool Foundation Ranger Patrol. 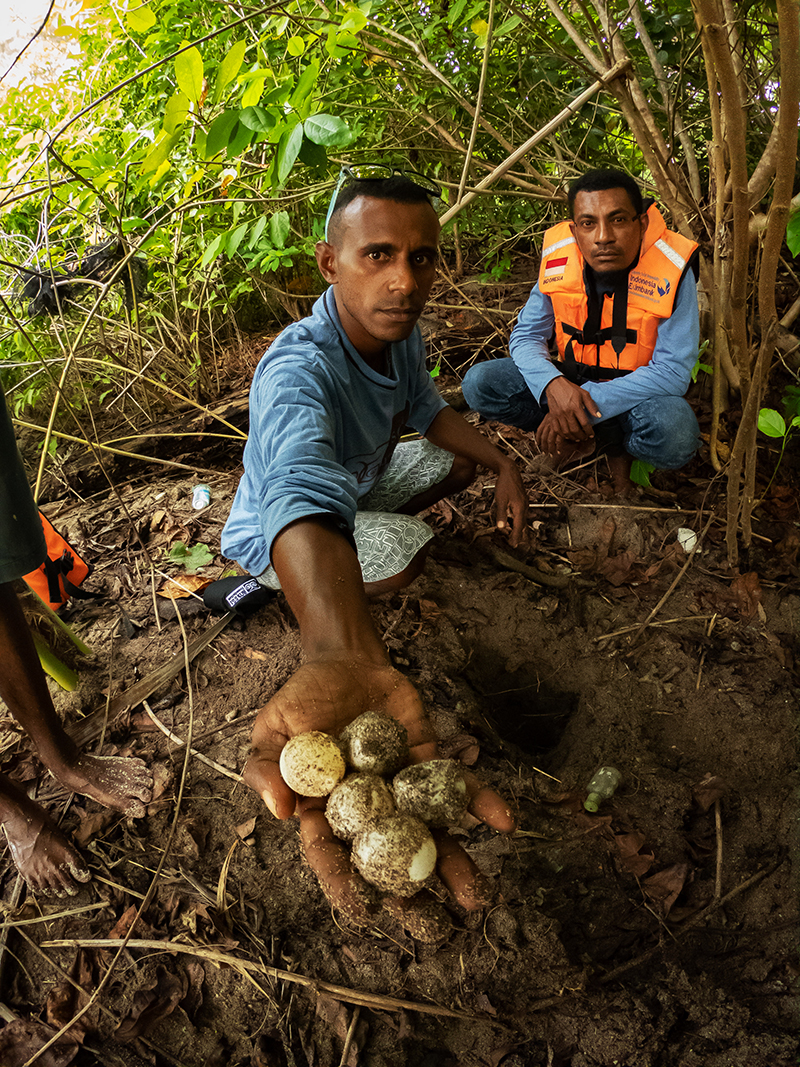 Locals recording GPS locations of turtle nesting grounds to safeguard them from predators and poachers.

In more technical terms, it aligns with a conservation movement whereby private enterprise (in this case, Misool Resort) funds conservation efforts (the Misool Foundation) driven by sustainable tourism (funds/donations from guests) and community empowerment (providing additional sources of income through tourism so locals don’t need to engage in illegal extraction). Many of the Misool Foundation Rangers are former illegal fisherman themselves, and now protect the reefs with their new viable income and employment.

For example, $100USD from each guest stay is donated to the Misool Foundation, in addition to support from private donors, profits from gift shop sales, and the ‘adopt a manta’ program (I named mine Fanta) to help protect the world’s richest reefs. It is also important to note that the Misool Foundation works with the Indonesian government to have army personnel on patrol to offset limited government resources.

This area of Raja Ampat is one of the only places in the world where marine biodiversity is actually increasing. And in a time of uncertainty for the health of our world's oceans, it’s a glimmer of hope for what sustainable travel can do to help. Misool constantly raises the bar with additional efforts such as funding teacher salaries and education in the local communities, starting the first and only recycling program in the nearby city of Sorong to help deal with the increasing problem of ocean plastic, installing a solar farm at the resort, building a hydroponic farm and using electric catamarans for dive boats. 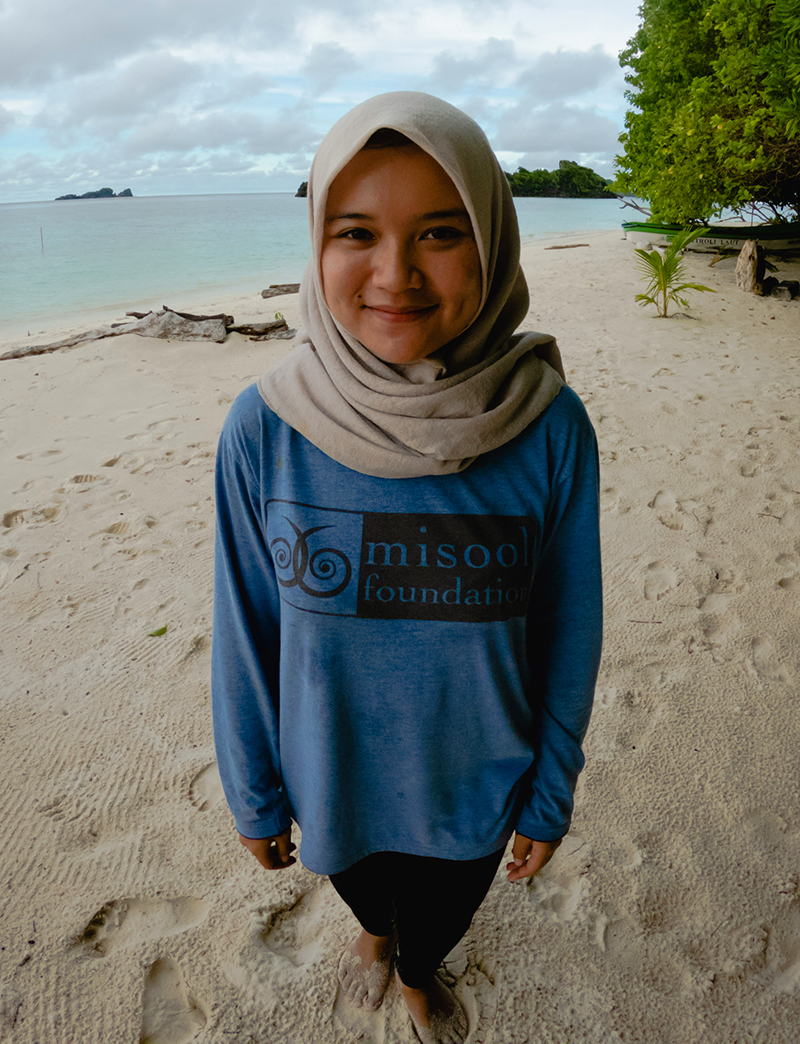 So what’s the secret to capturing breathtaking underwater content? The answer is short, but also easier said than done—basically, get to Misool, grab a GoPro, and jump in because the sea life is so pristine, the content comes effortlessly.

Thanks to extensive protection and restoration efforts, ocean adventure experiences at Misool are nothing short of unimaginable. Schools of fish in numbers rarely seen; turtles grazing on seagrass everywhere; clownfish in colors and species I didn’t even know existed; giant clams ageing over 75 years old; manta rays feeding in numbers; the list goes on, and this is all either just in front of the resort or a short boat ride away. 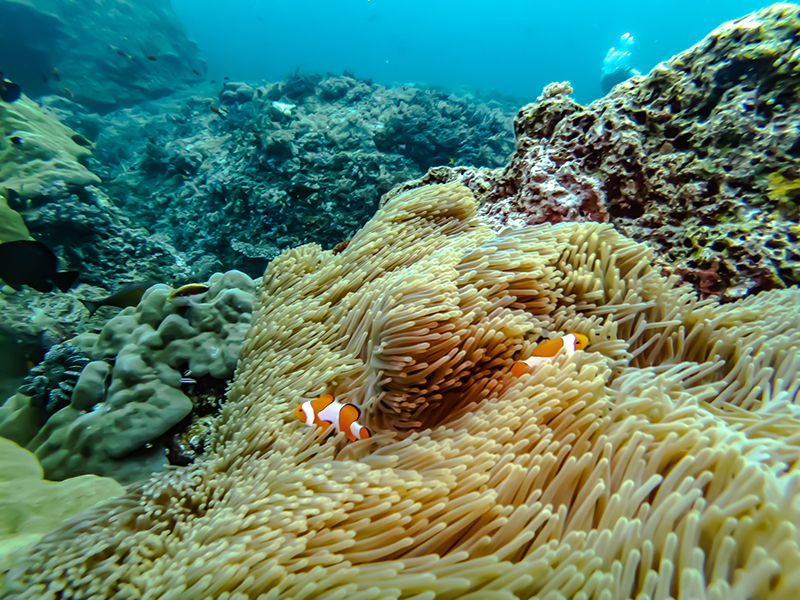 Each day there are also excursions to choose from, such as visiting Jellyfish Lake (one of only three freshwater, stingless jellyfish lakes in the world) or taking local cooking classes. Some of the best activities though, are right in front of the resort in the “House Reef,” where snorkelling invites anyone to live their best “Finding Nemo” life. It truly is as good as the diving, so if you’re not a diver, not to worry, some of the best life and most colorful corals are just below the surface. And for the adventurous night owl, snorkel by torch after dark to see the seafloor in a whole new light.

GoPro with its versatility and durability are not only integral to the documenting of my sustainable travel stories, but it is also an important tool for marine biologists. While spending time with Dr. Mark Erdmann and Sabine Templeton (who are featured in the video above), I learned that GoPro’s have long been an important tool for documenting their findings and research.

If you do decide to travel to Misool, or anywhere in Indonesia, I highly recommend you also stay at one of the many lodges available with Ecolodges Indonesia. From Oranutgan and elephant sanctuaries to alpine volcano lodges, Ecolodges Indonesia implements conservation and community empowerment efforts at all locations. 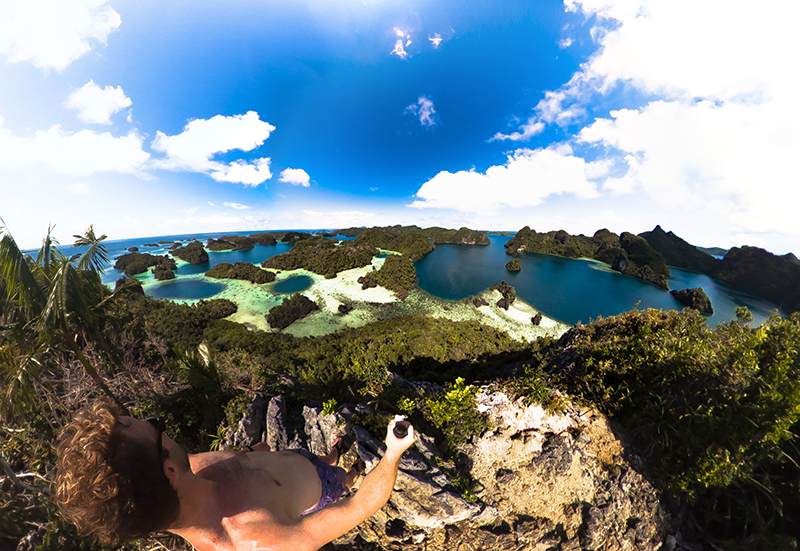 Find out more about Misool resort at misool.info or check out their Instagram and to learn more about Jonny, follow along on his blog or social channels Eco Escape Travel.