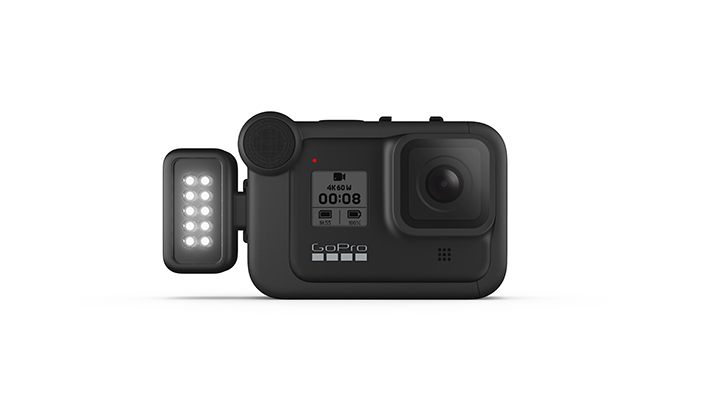 Experience the Award-Winning Features, Modes and Magic of HERO8 Black and MAX Cameras

Hey CES veterans, remember in 2018 when the convention center power went out? GoPro is coming prepared this year with its new Light Mod—the world’s most versatile light that will keep its booth shining, no matter what happens. Along with Light Mod, GoPro will be giving exclusive first looks at the full HERO8 Black modular accessory line, including Media Mod, available for pre-order tomorrow, Jan. 7, and Display Mod, available in March.

PLUS, there’s more! As an in-show BOGO exclusive, we’ll be offering the cloud-based GoPro PLUS subscription service at a “buy one year, get the second year free” discount. That means for $50 you’ll get two years of unlimited cloud storage, VIP customer support, discounts on GoPro mounts and accessories and, in many countries, damaged camera replacement. CES attendees can sign up for the offer during show hours at the GoPro booth.

And of course, the booth showstoppers will be the award-winning HERO8 Black flagship camera and the mind-melding GoPro MAX. Since their debut in October 2019, both cameras have lived up to the promise of next-level stabilization with HyperSmooth 2.0 and unbreakable stabilization with MAX HyperSmooth, respectively. They’ve also delivered over the top “WOW” features like TimeWarp 2.0 in HERO8 Black and PowerPano in MAX to bend time and space into videos and photos that look unlike any others.

GoPro will also host presentations in the booth’s theater space on Tuesday, Jan. 7, and Wednesday, Jan. 8, open to all CES attendees. The schedule is:

The GoPro Daily Giveaway will also take place at 3 p.m. in the GoPro booth on all but the last day of the show. The now-legendary camera and gear giveaway is a long-standing company tradition that can be heard across the tradeshow floor. CES attendees can sign up daily to enter-to-win on iPads throughout the booth.

Visit GoPro in Central Hall #16026 at the Las Vegas Convention Center to learn all about its groundbreaking HERO8 Black, MAX and modular accessories.

And INCYMI, here is footage of the lights going dark at CES 2018 while GoPro's own CEO and Founder Nick Woodman was mid-interview with CNN Money.