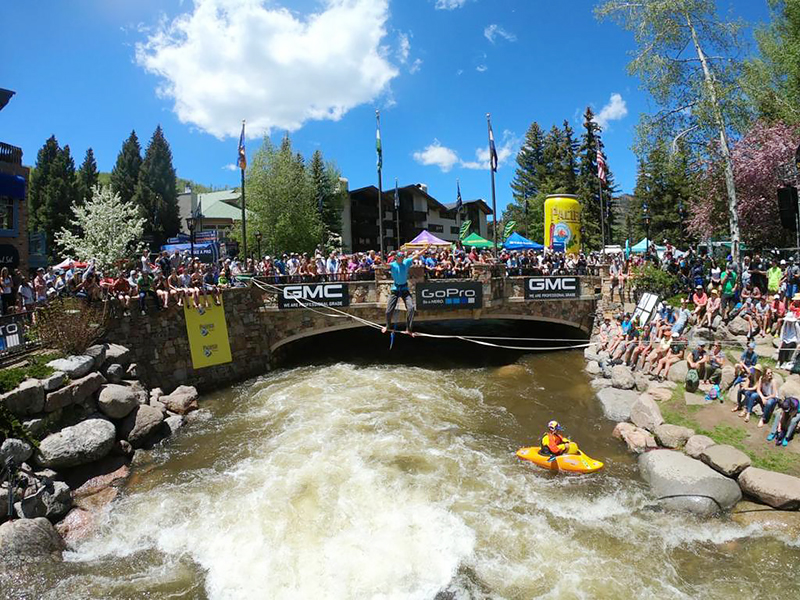 Splashing through the mud, charging through roaring whitewater rapids and conquering mind-boggling bouldering routes were all hallmarks of the 2019 GoPro Mountain Games during a picturesque weekend in Vail, Colorado.

With bluebird skies, snow-capped peaks and the vibrant green valley as the backdrop, athletes, fans and industry insiders from all corners of the outdoor world came together for the best weekend of the year. And proving that the best things in life really are free, there was no admission fee for spectators attending the festivities.

With seven different venues and endless options for fun, the only challenge for patrons was deciding what to do. The games featured four days of demos, live music, delicious food and a smorgasbord of competitions—whitewater paddling, climbing, slacklining, running, fishing, mountain biking and much more.

However, it was the blending of different outdoor communities that truly set this event apart.

“It’s cool to get mixed into different tribes,” said big-wave surfer Kai Lenny. “The river/mountain people’s personalities and approach to everything is different than the sea dwellers – in a good way. Since I don’t spend that much time up here, it’s pretty mind-blowing what they can do in the mountains.”

With Gore Creek running at levels not seen in years, whitewater events took on an extra level of excitement. Lenny and his fellow competitors provided some of the most exciting action of the weekend as standup paddlers, kayakers and rafters faced wild rapids and thrilled the crowd.

The IFSC Climbing World Cup was another crowd favorite as thousands of spectators turned out to watch an international field of climbers battle it out against each other and the wall. While all climbers put on incredible displays of athleticism, Janja Garnbret (Women’s) and Yoshiyuki Ogata (Men’s) took their performances to the next level–earning both victory and roars of approval from the crowd.

Of course, this weekend wasn’t all about competition. Gearheads found their happy place at Gear Town, which featured the largest collection of outdoor brands in event history. The Adventure Village offered fun for the whole family including several demos for kids. And we would be remiss to not mention the four-legged athletes that delighted the crowd in Dog Town by launching off docks, climbing over eight-foot walls and lots of tail wagging.

The fun didn’t stop when the sun dipped behind the mountain peaks either.

For three nights, incredible music filled the air at the Gerald R. Ford Amphitheater as beloved performers including Melvin Seals & Jerry Garcia Band, Joan Osborne and Citizen Cope serenaded the crowd. And as always, fans could attend the shows free of charge thanks to the Vail Valley Foundation.

2019 was the biggest year yet for GoPro Mountain Games. Now on its 18th iteration, the weekend has grown into a giant family reunion for the outdoor industry topping 85,000 attendees.