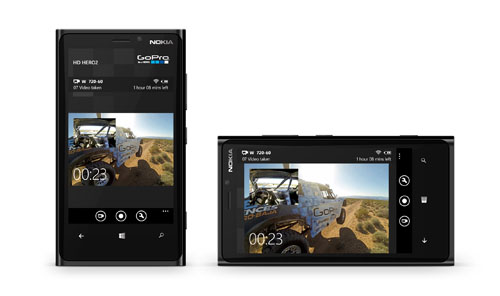 San Mateo, CA, May 13, 2013 – Nokia and GoPro, maker of the world’s most versatile camera, have launched an exclusive app for supported Windows Phone 8 smartphones. The free app allows GoPro HERO3 and HERO2 users to control their GoPro camera wirelessly through their Windows Phone 8 smartphones while capturing life’s most important moments. GoPro and Nokia have teamed up to provide users with the easiest and most intuitive way to maximize their GoPro camera. Exclusive for Nokia Lumia Windows Phone 8 smartphones starting with the Lumia 920, the PIP (picture-in-picture) feature allows users to overlay their smartphone camera view on top of the live GoPro view and take photos that are saved to the smartphone’s camera roll. For all Windows Phone 8 smartphones, the app features a live preview of the WiFi connected GoPro HERO3 or HERO2 camera for easy shot framing, as well as complete remote control of the camera’s settings. Additionally, it provides instant access to access to the GoPro Photo of the Day, Video of the Day, and Twitter feed, so no moment is missed.

“Nokia believes in delivering the best app experiences for Lumia owners, and that is evident through the GoPro Windows Phone 8 app with exclusive picture-in-picture capability,” said Bryan Biniak, Vice President of Global Partnerships and Application Development. “By leveraging our Nokia PureView camera technologies users will be able to capture the best photos while connected to their GoPro HERO3 or HERO2 camera.”

“Unique features such as resizable Live Tiles and support for fast resume bring apps to life on Windows Phone,” Todd Brix, general manager, Windows Phone Apps, Microsoft Corp. “GoPro takes advantage of all of these features as well as the Lumia 920’s award-winning camera to enable users to easily preserve and share their memories on the go.”

To learn more about and download the app, visit the Windows Phone 8 Store.