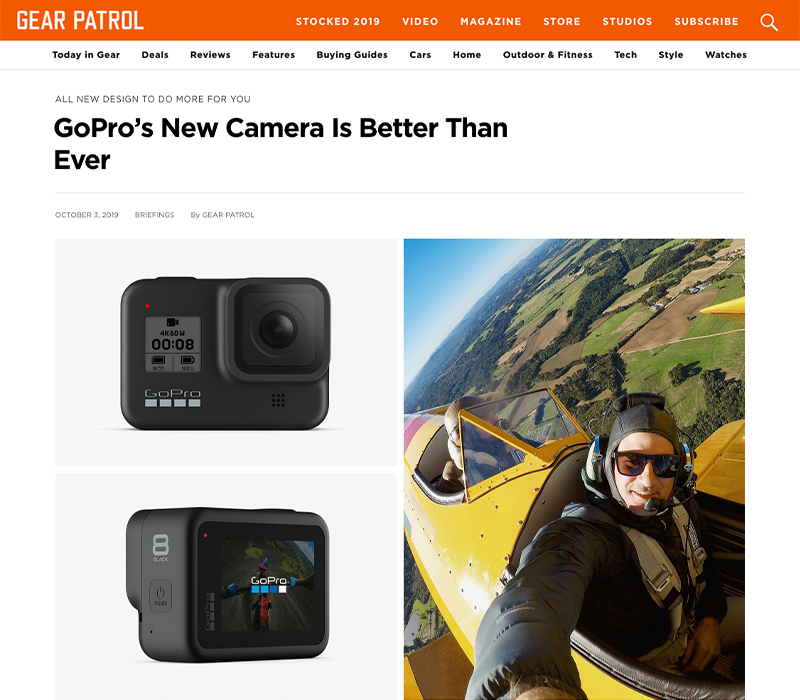 Adam Sandler recently outlined all the gear he needs when traveling to the West Indies. Besides his laptop, phone, wallet, passport, keys, he adds GoPro to his must-pack list. And now that HERO8 Black is in the wild, the latest flagship GoPro is consistently topping gear lists across around the world. Just take this post by Gear Patrol for example.

"GoPro is launching its latest camera, and it’s worth a serious look. HERO8 Black is a true game-changer, with a streamlined design and beefed-up tech. And now there are built-in mounting fingers, so you can move the camera from mount to mount in a flash.

But as HERO8 Black marks the first major design update since HERO5 Black, the features inside have been steadily getting more powerful. Let’s start with HyperSmooth 2.0. Now you get three levels of stabilization—including an incredible Boost mode—delivering the smoothest video ever offered by a HERO camera. Then there is TimeWarp 2.0, which auto-adjusts speed based on your motion. You can even slow down the effect to real-time—savoring interesting moments—and then tap to speed it back up. You’ll also dig the improved SuperPhoto + HDR that makes capturing brilliant pics easy, the four digital lenses and the mega-convenient custom presets.

There’s also a new accessory system called mods—plug-and-play add-ons like lights, mics and more. Pre-order now, or get yours as soon as it drops in late October."