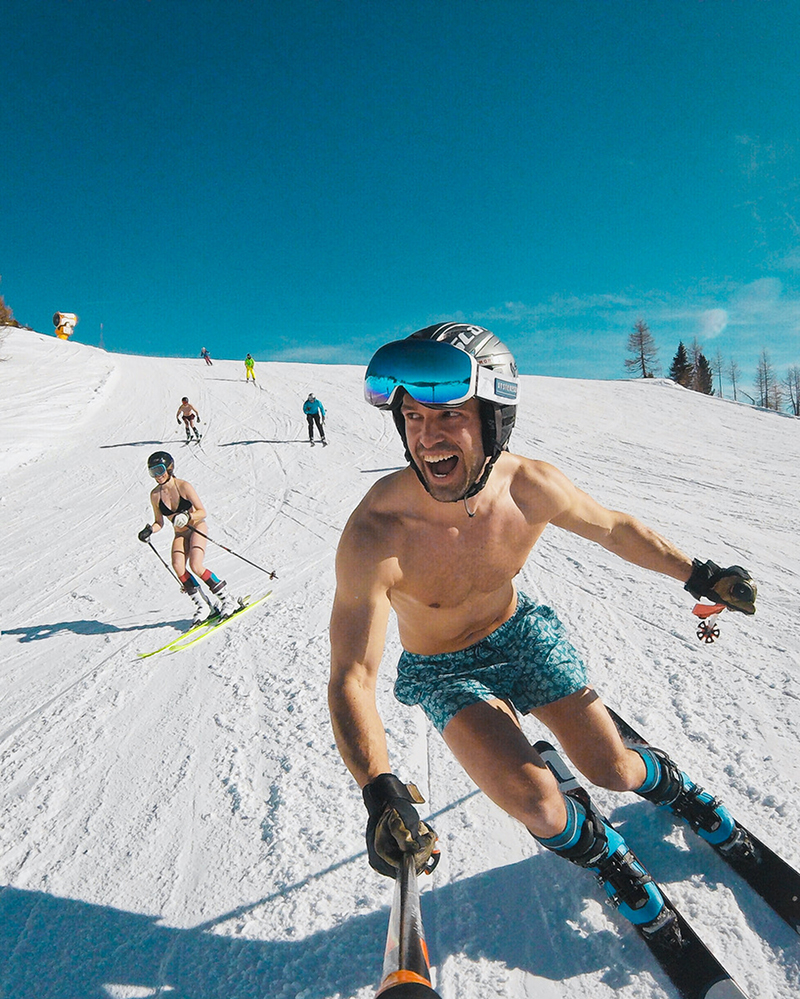 We'd be happy to have half as much fun as Philipp every day; this guy is all positive vibes, all day! We caught up with him to hear about life before and after #HomePro and to get the dirty deets on how he executed the Freeride At Home video.

In short, Philipp says he connected his camera to the GoPro app, taped it to the ceiling and started slowly capturing his movements.

“A really nice feature that might go unnoticed for many on the GoPro app, and is super useful for stop motion, is the fact that you can swipe through all pictures really fast,” Philipp says. “This allowed me to simulate the stop motion as soon as I had shot it, knowing when I had to repeat or when it was in the box!”

You can watch the whole process unfold in the YouTubevideo above. Or if you want to learn a little bit more about Philipp, the following is his story in his words:

Normally I’m out and about a lot, I spend most weekends skiing/climbing/mountaineering, so I need something rugged, compact and light, where it’s perfect. Since I got this HERO7 Black, I’ve been able to post much more content, especially videos, thanks to the awesome stabilization

Just before the confinement in Spain, I had tickets to travel to France and ski there with my family for a week. The same day Spain was shutting down on March 16, I could have jumped on a bus and travelled to France, but it didn’t seem practical, nor ethical, anymore to go skiing while people were struggling for their lives in my country. So, I decided to stay, even if France was still open, losing the money of my reservations. It just didn’t feel right to leave at that point.

Since I was home, I kept working and focused on staying active, as if normal life was still going on—working, training, playing guitar, reading, etc. As the days went by, I started receiving lots of funny videos about people doing outdoor sports at home. I thought it was cool and would love to do one, but I didn’t want to do the same thing everyone else was doing. It had to be original and positive. It was important for me that the finished product spread a positive message, because I really wanted to make my family and friends forget the current health situation and cheer up a little. I was sick of sad news and wanted to change that by giving smiles.

I didn’t obsess over it and felt no pressure. I just thought that if I came up with an original idea, I’d film it. A few days later, the idea sparked into my mind and suddenly I could only think about this project. It was like my brain was on fire, trying to plan if and how this could be done, how to adapt to my limited means. I spent a day getting the story right, to be funny, cheerful, simple and with the positive message: Stay home.

I waited for the next time I had good light coming into my house, and I went for it. I had to move the furniture, set up the camera (HERO7 Black + literally taped to the ceiling), put on ski gear and filmed it all alone. I felt like almost dying from heats hock, but I had a ton of fun! Many things were just as story-booked, but others had to be improvised to adapt to what was working and what wasn’t. After six hours, everything was in the box.

Then, came four hours of editing in Final Cut Pro, where most of the time was spent on sound editing—I wanted it to feel like an actual mountain adventure if you closed your eyes.

When I posted the video, it literally exploded. I never expected this kind of traffic. I knew I had done something good and that my result was pretty close to my idea, but I never thought it would go this far this fast. Major news agencies are calling me around the clock to talk! This is amazing, but I know that virality goes as fast as it comes, so I expect to go back to my “normal” life soon.

My final thought for the pandemic would be: Focus on the positive, it’s the only way to use this time to reconnect instead of longing for “normal” routine to come back. After all, we’ve all said “If I had more time, I could …” Well, now we have that time, it’s up to us how we use it!

Well said, Philipp! You can follow Philipp’s future adventures on YouTube and @philippklein. And if you're feeling inspired, you can submit to the #HomePro Challenge on GoPro Awards.